Social Media Money System and Why I Was an Idiot

Social Media Money System (official site at SocialMediaMoneySystem.com) – One more time something really good appeared in the skies of Interent Marketing. And I’m not saying that to hype things up – there’s enough hype in IM already. I’m saying that because it showed me what an idiot I am (an let’s be fair, chances are you were too). This product is really promissing, and here’s why…

You see, ever since the dark (gold?) ages when  all it took to rank high on Google were a few backlinks from absolutely anywhere with the correct anchor text and the outrageous popularity of article networks, people post articles all over the net to get backlinks and traffic to their websites. I do it, you do it, everyone does it!

Then, the Web 2.0 was born. Hundreds of interactive Web 2.0 sites with communities appeared. This was not to be left unused by the Internet marketers. So they started posting articles in there and began calling it the next big thing. But guess what, they got it worng. I got it worng, you got it worng, 99% of people got it wrong. You see, we were treating Web 2.0 like nothing else but good ol’ article directories. We’d post an article, maybe promote it by pointing backlinks to it elsewhere and that’s it. But what’s “2.0” about that? Nothing!

Perry Beltcher made me realize i was living under a rock. Web 2.0 is not about publishing your articles or press releases, it’s all about the community. And community doesn’t care about your stupid articles, they care about you! They want to see stupid messages from you, silly videos and pictures and so on. They don’t want to be sold stuff to.

That sound interesting, but how do you use that? Exactly the question that should have sprung long ago, instead of literally spamming Web 2.0 sites with useless crap! And that’s the question Social Media Money System answers. 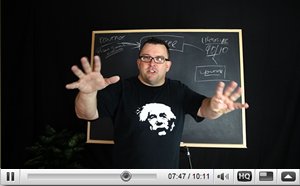 The sytem brings up the whole new concept of how Internet Marketing should be done. There’s really something 2.0 about it. If you saw the pre-launch videos and other material (and if you didn’t, you lost a lot), you can already tell Perry Beltcher is on to something. The way he suggest using Web 2.0 is counter-intuitive but might just work for that reason. It works for him.

To sum up the pre-launch material, if you haven’t seen it, Social Media Money System tells you not to promote anything most of the time, but rather do what every “normal” user does – interact with others, talk about interesting stuff. Then it shows a scheme how all social media sites add up together in the big picture and where the money appears. Essentially, all comes down to your blog where you “conveniently” recommend stuff. The key is that you don’t push your blog to everyone’s face like mad (and like everyone else is doing – if you haven’t been on twitter, go see how many idiots are doing just that).

So really,  Social Media Money System is an eye-opener. It tells you how exactly where the marketing is going, what we will be doing in the coming years to make a living online, and why a 13-year old boy with a camcorder can kick your ass in marketing any day of the week and twice on Sunday.

Social Media Money System is a must have if you want to survive in the IM world tomorrow. And that’s not hype, that’s reality.