Here’s a product based around a simple but great idea. Magic List Bot is actually a bundle of 3 programs but in a nutshell its idea is about persistent list building. And to explain what I mean by persistent, let me give you an example.

Let’s say you’re promoting an offer as an affiliate. Doesn’t matter how you do it – pre-sell page, review site, direct-linking, whatever. And let’s say you want to build a list at the same time. In some cases (pre-sell page or review) you will be able to add a distracting form, but distractions aren’t good. In other cases you won’t be able to add the form anywhere at all. Or so you would think. 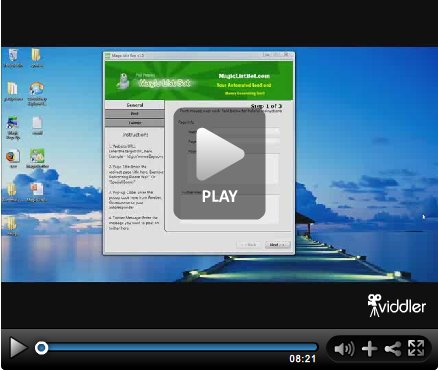 As a matter of fact, you can add a pop-over window anywhere you like, even if you’re direct-linking. This is what Magic List Bot does, and this simple idea is quite useful.

For those wondering, the “magic” that it does actually is an iframe and a JS pop-over script. It’s not a complicated concept at all for any at least half decent JavaScript programmer. But, I’ll tell you, I haven’t thought of doing it before, if only because I like to focus on one thing without distractions in my promotions.

At this point let me also point out the common sneaky trick that the marketers often try to pull off, and this is the case as well. They tell you very bold and shocking claims, such as “steal leads from other sites” and so on. That’s as if you can inject your code to those sites and have all visitors see your opt in form. That’s not how it works. The site with your popup is in an iframe on your own site which you still have to promote as any other offer. Be sure you understand this.

Nonetheless, Magic List Bot offers a ready script and a code generator that even posts on Twitter with a click of a button. That’s a nice touch. It also has some bonuses as a way to drive traffic to your promos, namely using Twitter.

It sounds good, but my concern when it comes to buying is the following. Do you see it implemented in your promotions? Do you instinctively say, “ah, that’s what I needed”? And finally, can’t you implement this idea yourself?

I would get Magic List Bot under two circumstances; either to add the optin popups to my offers the way it does after banging my head why I didn’t think of it myself, or just to try to get my Twitter followers into my list as the software proposes as a bonus.