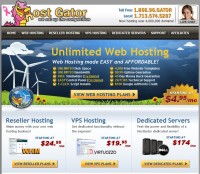 I’ve also had a shared hosting plan with HostGator before I’ve bought the dedicated server so it’s been a long ride with this hosting provider, and there are a few things to share.

If there’s one thing I can say about this service, it’s the superb support – that’s why I’ve stayed with them for so long (that and a good uptime). I’ve had dealt with the support several times over these years, via phone, email, help desk and live chat. Every time they’ve been fast to respond and helpful.

As I’ve also dealt with other host providers over the years, I gotta give HostGator the #1 spot for the best support.

Next, the reliability and uptime. My server is an old machine now, over 3 years (as of writing this) is like 30 years in computer years. And the age has taken its toll quite recently – I’ve had some downtime issues, but they were promptly resolved (another thumbs up to the support). But other than that, it’s still working like it’s supposed to.

As far as the features, the hosting plans are pretty standard to the hosting industry, the prices are also fair. I’m not gonna go into much detail of what you can get with a hosting account, you can see all details at hostgator.com

It wouldn’t be a proper review if I didn’t mention any negatives. Nobody is perfect and I can come up with some negatives that I’ve found along the way. For instance, the fact that when I was registering with them for the very first time, I’ve received my account and as I’ve already set up my site my account was put on hold, and I had to verify it by phone. Not very convenient to say the least. That almost made me change my mind about using them, but since I’ve already did the work to set everything up, I’ve gone through the verification process which was luckily quick and painless.

As another negative I’d point out one that is subject to my dedicated server. I would say it’s somewhat of neglecting to still have servers running an archaic Apache 1.3.x version, which was exactly the cause of the aforementioned downtime. The problem was solved with a simple upgrade.

But really I’m just nitpicking. HostGator is a great hosting provider with a decent reliability and the best support in the industry I’ve seen.

Update: Since writing this review I’ve upgraded my server, i.e. moved all sites to a new faster machine, which is still with HG. The old machine was a couple months short of 4 years, which is like a century in computer years, and it was really having a hard time with serving the ever growing traffic. The day has come and I knew I had to do it sooner than later. However, moving a dozen of sites to a new server is not an easy feat, so it’s a great test of a hosting service.

I’m happy to report that the transition went smoothly and seamlessly (which is very important since all of my live sites combined get about 4,000 visits every day) with almost zero work on my part (except for checking the sites to make sure everything works fine) and without any downtime. The HostGator guys did everything and didn’t even charge any fee for it (which I would have gladly paid if there were any). A big thumbs up for a job well done from me.

To conclude this review, here are a couple of coupons (choose whichever gives you the best discount):

Just click to go there, choose a plan and enter the coupon code when asked.